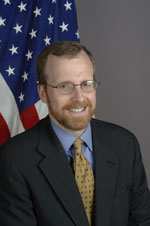 Former Assistant Secretary of State for Democracy, Human Rights, and Labor (2008-2009). Accompanied Senator John McCain to a conference in Nov, 2016 after the election. McCain was approached by Sir Andrew Wood, a retired British diplomat who told McCain of the dossier. Kramer subsequently met with Steele, read the dossier and reported back to McCain.