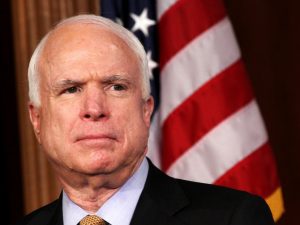 After the election in Nov, 2016 Senator John McCain attended a conference along with David Kramer, a former assistant Secretary of State and was approached by Sir Andrew Wood, a retired British diplomat who told him of the dossier. Kramer subsequently met with Steele.
On Dec. 9, 2016 McCain provided James Comey, Director of the FBI with a copy of the dossier. It was used by the FBI to obtain FISA warrants to spy on Trump foreign policy advisor Carter Page.

One thought on “John McCain (US Senator)”