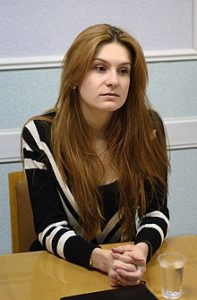 Russian born citizen, gun and hunting enthusiast from her early childhood in Serbia. Depending on who you believe, she wanted to strengthen US-Russia ties that would benefit gun ownership in Russia -and/or- advance her political aspirations -and/or- she was a spy. After a plea bargain, Butina pleaded guilty to conspiracy to act as an illegal foreign agent and sentenced to 18 months. She was placed in solitary confinement while cooperating with officials on an investigation against Paul Erickson, an American conservative political operative, whom she had a relationship with. Butina was also courted by Patrick Byrne, founder and CEO of Overstock.com, as part of an FBI Russia investigation. She was deported in October, 2019 after serving 15 months.