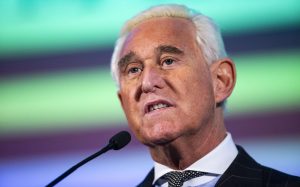 Longtime friend of Donald Trump and advisor on the 2016 Presidential Campaign, officially left campaign on Aug 8, 2015.
An Oct 20, 2017 memo from Acting Attorney General Rod Rosenstein identified Stone as a subject in the Mueller investigation.
In the early morning hours on Jan 25, 2019, Stone was arrested in a spectacle that involved 29 heavily armed FBI agents, a helicopter and a CNN camera crew.
In Nov, 2019 he was convicted on 7 counts of process crimes (obstruction, 5 false statements and witness tampering) and sentenced to 40 months in federal prison.
On July 10, 2020, just days before reporting to jail, his sentence was commuted by President Trump, claiming that the investigation was a hoax and Stone’s prosecution was politically motivated and unfair.