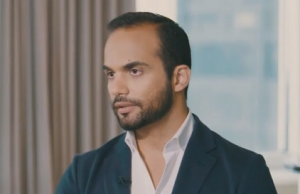 Papadopoulos joined Trump’s foreign policy adviser team as a volunteer in early March 2016. He was interviewed by the FBI in Jan, 2017 and subsequently arrested in July. Papadopoulos pleaded guilty to lying to federal investigators as part of a plea bargain and sentenced to 14 days in prison, community service and fined. He published a book, Deep State Target, alleging entrapment by government intelligence agencies in order to surveil the Trump campaign. (May, 2019 video interview)