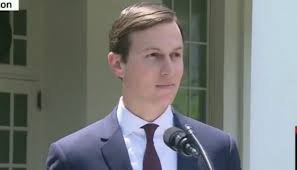 Married to Donald Trump’s daughter, Ivanka Trump.
While campaigning for his father-in-law during the 2016 election, Kushner had four meetings with Russians, including Russian ambassador, Sergey I. Kislyak.
He subsequently appeared before both the House and Senate Intelligence committees and was investigated by Robert Mueller.
But nothing was deemed improper.
Some believe Kushner was “the person who ordered Michael Flynn to contact Russia”.