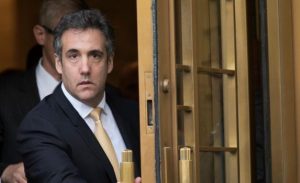 2006-2018 Trump’s personal counsel, often referred to as “the fixer” (making problems go away).
As a result of the Mueller investigation, which cast a wide net, Cohen was charged with and plead guilty to several counts including campaign finance violations, tax fraud, and bank fraud on Aug 21, 2018.
Cohen said he violated campaign finance laws at the direction of Trump.
In November 2018, Cohen entered a second guilty plea for lying to a Senate committee about efforts to build a Trump Tower in Moscow.
In December 2018, he was sentenced to three years in federal prison, ordered to pay a $50,000 fine and disbarred.