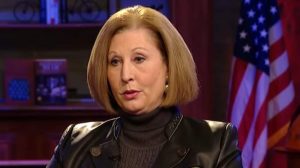 Attorney for US General Michael Flynn, the National Security Advisor for President Trump.
When Flynn was represented by his previous attorney, he pleaded guilty to lying to the FBI.
Powell later filed a motion to dismiss the charge, citing several reasons, including the FBI attempt to entrap Flynn and that he did not intentionally make false statements.The motion was denied.
Powell is also the author of the bestselling book, License to Lie, Exposing Corruption in the Department of Justice.