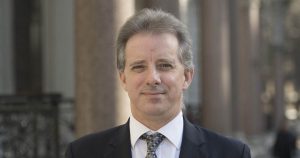 A former British intelligence officer with experience in Russia and co-founder of a private investigative firm in London.
His company produced “the Steele Dossier” while working for Fusion GPS, an intelligence firm in Washington DC.
The dossier was the product of opposition research during the 2016 election.
The research was originally funded by a conservative entity in Sept, 2015 and ended in the spring of 2016, after Trump received the Republican nomination.
The research resumed and was paid for by the law firm Perkins Coie, on behalf of the Clinton campaign and the Democratic National Committee, from April to October in 2016.
Steele continued to work on the dossier after the election without funding.
In December, 2016 US Senator John McCain obtained a copy and passed it on to FBI Director, James Comey.