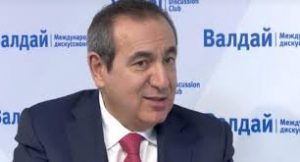 The Mueller Report identifies Mifsud as “a London-based professor who had connections to Russia and traveled to Moscow in April 2016. Immediately upon his return to London from that trip, Mifsud told Papadopoulos that the Russian government had ‘dirt’ on Hillary Clinton in the form of thousands of emails.” (April 26, 2016)
(Note: This rumor had been circulating in the media, including the Washington Times beforehand.)
Mifsud was interviewed by the FBI in Feb, 2017 and emailed them shortly afterwards, downplaying conspiracy suspicions, stating his meeting with Papadopoulus “was to create a mutual understanding on world affairs and how we can contribute to peace and stability.”
Mifsud was later characterized as “a western intelligence operative who was tasked by the CIA (John Brennan) to run an operation against Trump campaign official George Papadopoulos”. (theconservativetreehouse.com)
The Mifsud/Papadopoulus encounters were reportedly the predicate for the entire Russia counter intelligence investigation (“Crossfire Hurricane”) and subsequently landed Papadopoulos in jail.