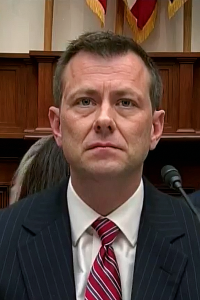 Strozk was an FBI official, Counterintelligence Division and led the FBI investigation into the Clinton personal email server and Russian interference in the 2016 election. He was removed from the Mueller investigation after personal text messages to FBI attorney Lisa Page revealed a bias against Trump.
Lisa Page: “[Trump’s] not ever going to become president, right? Right?!”
Peter Strozk: “No, no he’s not. We’ll stop it.”