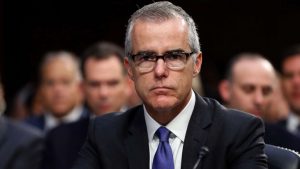 McCabe was the Deputy Director of the FBI, appointed by Director James Comey in Jan, 2016.
He was assigned to the Hillary email investigation.
McCabe was fired by Attorney General Jeff Sessions days before his retirement, for authorizing the release of confidential information about the Clinton Foundation investigation and lying about it to federal agents.
He later stated that after Comey had been fired, Deputy Attorney Rod Rosenstein held a meeting with top officials and suggested using the 25th Amendment to remove Trump from office.
The claim was refuted by Rosenstein, who said it was made sarcastically.