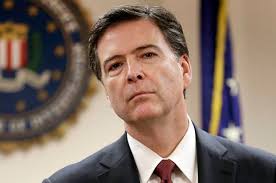 Director of the FBI (2013 – May, 2017). Comey was in charge of the Hillary Clinton email investigation. He re-opened the investigation two (2) weeks before the 2016 election (to the ire of Democrats) and drafted an exoneration letter before the investigation was complete (to the ire of Republicans).
On March 20, 2017, during his testimony to the House Intelligence Committee, Comey confirmed that the FBI began a counterintelligence investigation of the Trump campaign and Russia in late July, 2016 (under Deputy Director Peter Strzok).
On May 9, 2017 Comey was fired for the handling of the Clinton email investigation. Shortly thereafter, a Special Council (Robert Mueller) was appointed to investigate Russian interference with the election and connections with the Trump campaign.
After Comey’s firing, he leaked a memo sighting President Trump’s request to end the Michael Flynn investigation.