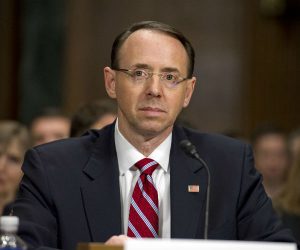 US Deputy Attorney General (Apr 26,2017-May 11,2019). After a discussion with President Trump, wrote a memo criticizing then FBI Director Jim Comey, resulting in Comey’s firing. Discussed using the 25th amendment and “wearing a wire” with other officials to remove President Trump from office. Later claimed he was being sarcastic. Appointed Special Counsel Robert Mueller to investigate Russian Interference and the Trump campaign in the 2016 election.