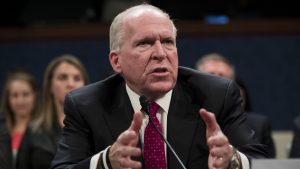 Director of the CIA (Central Intelligence Agency) during the 2nd term of the Obama administration (2013-2016). His appointment ended in Jan, 2017 when Trump took office and nominated Mike Pompeo. Brennan was/is critical of Trump, who revoked his security clearance in Aug, 2018, creating controversy. Considered by some to be part of “The Deep State”.